Czech Republic will compete at Eurovision 2016 with ‘I Stand’. The song will be performed in the second half of the first semi final on 10th May by singer Gabriela Guncikova. Listen to the song below.

END_OF_DOCUMENT_TOKEN_TO_BE_REPLACED The Czech Republic have an atrocious track record at Eurovision. In their four appearances, since their debut in 2007, they have failed to qualify for the final on every occasion. After a a five year gap between 2010 and 2014, Czech Republic returned to Eurovision in 2015 with duo Marta Jandová and Václav Noid Bárta. Their song ‘Hope Never Dies’ finished 13th in Semi Final 2, failing to advance. Can they turn this misfortune around in 2016? Let’s see what they have in store.

END_OF_DOCUMENT_TOKEN_TO_BE_REPLACED

2015 seems to be the year for male female duos singing ballads. Not one to deviate from this theme, Czech Republic have chosen Marta Jandova and Vaclav Noid Barta as their entry for this year and their song is- shocker!- a piano ballad called ‘Hope Never Dies’. 2015 sees Czech Republic return to the contest following a five year haitus, and they are hoping to return to the contest with a bang. Can they deliver this? Read on to find out.

END_OF_DOCUMENT_TOKEN_TO_BE_REPLACED 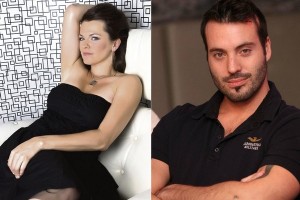 It was announced months ago that Marta Jandová and Václav Noid Bárta would duet on the song ‘Hope Never Dies’ in an attempt to win the 2015 Eurovision Song Contest for the Czech Republic. This week the song was released so that fans could hear it for the first time in its entirety.

Have a listen to the song below and let us know what you think. Does it have a chance of winning? Will it get lost in a sea of ballads this year?