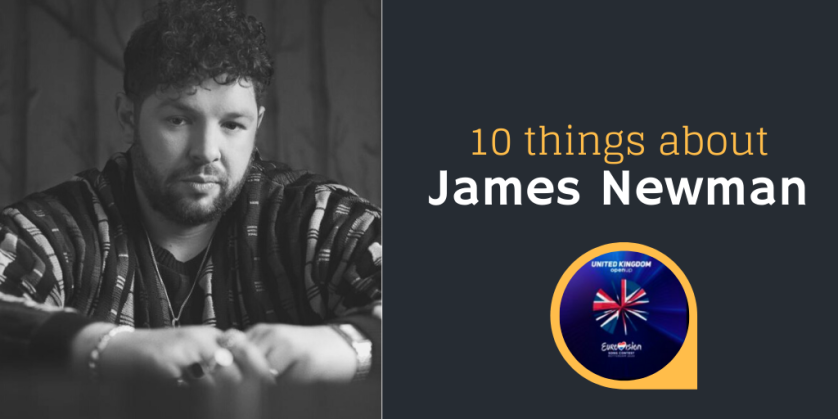 James Newman will represent the United Kingdom at Eurovision 2020 with the song ‘My Last Breath’. We get to know the singer better with 10 Things About…James Newman!

1. James Newman is a London-based singer songwriter who was born in the small market town of Settle in North Yorkshire in England.

2. James’ brother is John Newman who is best known for his hits ‘Love Me Again’, ‘Feel the Love’ and ‘Not Giving In’. James has written a number of tracks for John including the number one hit ‘Blame’.

3. James’ writing credits are not just a family affair. He has written for some of the biggest names in pop including Little Mix, Kesha, Ed Sheeran, Calvin Harris, Jess Glynne, Louis Tomlinson, Olly Murs and the Backstreet Boys.

4. He is no stranger to Eurovision either having penned the Irish 2017 Eurovision song ‘Dying to Try’ which was performed by Brendan Murray. The song failed to reach the final, languishing in 13th place in the semi final.

5. James won a BRIT Award in the Best Single of the Year category for the song ‘Waiting All Night’ which was performed by Rudimental and Ella Eyre. The song also gave him his first number 1.

6. James has twice been nominated for a Grammy award. These were for co-writing the songs ‘Coping’ from Toni Braxton’s album ‘Sex & Cigarettes’ and ‘Let ‘Em Talk’ from Kesha’s album ‘Rainbow’.

7. Up until recently James has focused on songwriting but from 2015-2019 he has featured as a guest vocalist on a number of songs including top 40 hit ‘Therapy’ by Dutch DJ Armin Van Buuren.

8. James recorded his Eurovision song ‘My Last Breath’ in Scotland while staying on a Loch with fellow songwriters, Ed Drewett, Iain James and Adam Argyle. James knew ‘My Last Breath’ was ‘the one’ after recording it; he loved the simplicity of the song and felt like it gets you right away.

10. The video for ‘My Last Breath’ was recorded in Sweden and sees a semi naked older man walk around the woods with his dog in the freezing cold as he attempts to cope with the bitter temperatures through controlling his breathing.