Poland’s Roksana Weigel has won the 2018 Junior Eurovision Song Contest with song ‘Anyone I Wanna Be’. The competition took place earlier this evening in Minsk-Arena Belarus and featured a record breaking 20 nations including Wales and Kazakhstan who competed for the first time. The show kicked off at 4pm CET and was presented by Eugene Perlin and Zinaida Kupriyanovich. It opened with each of the twenty nations being introduced during a performance of ‘Light Up’ a song written specially to showcase the Contest’s slogan for 2018.

Each of the countries then took it in turn to perform their competing songs starting with Ukraine’s Darina and finishing with Poland’s Roksana.

Voting for the contest was carried out exclusively online. The first round of voting lasted right up until the show started on Sunday, 25 November, 15:59 CET.

The second round of voting started after the last country had performed and lasted for another 20 minutes. You could vote for between 3-5 songs and could even vote for your own country. Last year’s winner from Russia Polina returned to sing her winning song ‘Wings’ as the interval act.

It was then time to reveal the results. Poland won with a total of 215 points. This is the first time they have won JESC. France’s Angélina was second, while Jael was third for Australia.

Full results are pictured below: 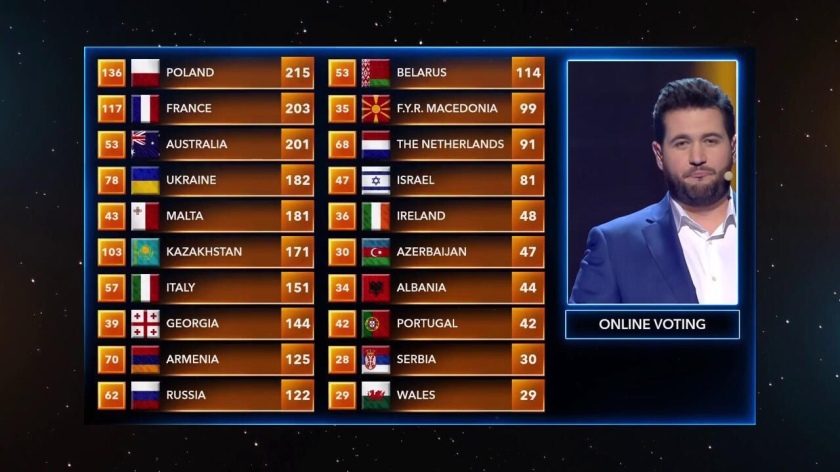