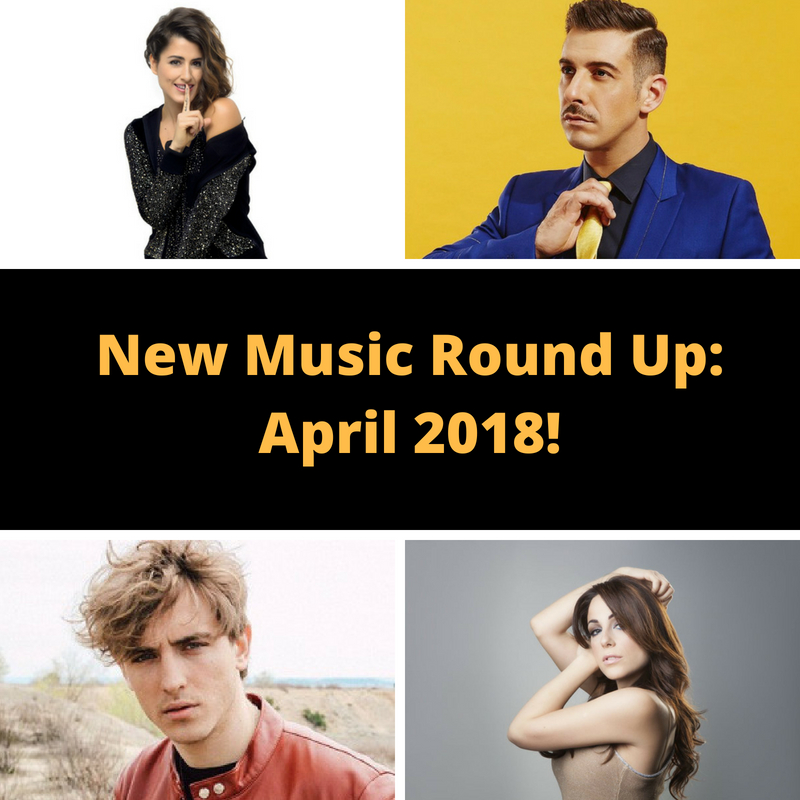 Next month will see the 2018 edition of Eurovision take place in the Portuguese capital of Lisbon. Ahead of that we look to some of our favourites from past contests to see what they’ve been up to and what new music releases they’ve treated us to this month. Among them are Spanish singers Barei and Manel Navarro as well as new offerings from Tim Schou, Francesco Gabbani, Ira Losco and Fabrizio Faniello. Enjoy!

Fabrizio Faniello comes from one of Malta’s most talented musical families. He himself represented the nation at Eurovision twice; first in 2001 placing ninth with ‘Another Summer Night’, while his second attempt in 2006 saw him finish 24th with ‘I Do’. More recently his sister Claudia competed at the 2017 contest but her song ‘Breathlessly’ didn’t make it to the final. Since his Eurovision appearances, he has competed a further three times at the Maltese Eurovision selection process MESC and has released a number of singles including ‘Walking Away’, ‘Life Goes On’ and ‘Just No Place Like Home’. He returns with his new album ‘Unexpected’ in 2018 and the lead single from it is also called ‘Unexpected’. The track doesn’t live up to its title. Everything here is very much expected. It is a typical ballad with bland piano and crooner style vocals from Fabrizio. Nothing to rave about here.

Tim Schou is the lead singer of the Danish band A Friend In London who came in fifth place at the 2011 Contest with ‘New Tomorrow’. The band split in 2014 and since then Tim has enjoyed success in Scandinavia as a solo artist. His most recent releases draw on some of his musical and artistic inspirations. ‘Morrison’ was a tribute to the Doors’ lead singer Jim Morrison, ‘Young Vince’ meanwhile draws inspiration from Don McLean’s ‘Vincent (Starry Starry Night)’ and his latest offering is (sorry Kurt Cobain fans) not about the grunge band ‘Nirvana’. Instead it is an upbeat pop song with electric guitar riffs and lyrics which reminisce about Tim growing up.

Ira Losco- ‘One In A Million’

Two time Eurovision finalist (‘Seventh Wonder’ second in 2002 and ‘Walk On Water’ twelfth in 2016) Ira Losco is back with new music! Her next song is entitled ‘One In A Million’ and sees her build on an already impressive back catalogue of pop hits. The Maltese singer has a staggering 48 singles and 5 albums under her belt already and her 49th is another tune! ‘One In A Million’ plays to Ira’s strengths as a mid tempo piano ballad with more of a dance feel on the chorus and the lyrics tell a story about how love in a relationship would endure if her partner wasn’t so keen.

Francesco Gabbani will probably forever be that guy who danced with a man in a gorilla suit at Eurovision 2017. This however has not deterred him from releasing new music. Since his sixth place finish at Eurovision with ‘Occidentali’s Karma’, he has gone on to release his third album entitled ‘Magellano’ which spawned the hit singles ‘Tra le granite e le granate’, ‘Pachidermi e pappagalli’,’ and now his latest single ‘Selfie del Selfie’. The song is about…well your guess is as good as mine. Francesco wails through bizarre electronic music the lyrics ‘Selfie of the selfie, there are elves doing the wave in the school. Let’s share, for time flies’. I assume this is a rejection of modern culture, and in particular young people’s obsession with themselves and getting likes on their social media accounts. The style of the song is a departure from what we’re used to from Francesco and while I’m all for experimentation, I’m not sure if this works.

Manel Navarro was a little bit too cheesy and cringey for my liking when he surfed his way onto the Eurovision stage in 2017 for Spain. His song ‘Do It For Your Lover’ was just too much surfer dude braw for me. He has ditched the Hawaiian shirt, chopped off his golden locks and his latest song ‘Voulez-vous Danser?’ is a little bit more palatable. While it still draws on his trademark Bieber-esque reggaeton sound, it is easily much better than his Eurovision effort which flopped coming in last with only five points.

Barei- ‘You Number One’

Another former Spanish Eurovision star now. This time it’s the 2016 representative Barei, who placed 22nd with ‘Say Yay!’. Since Eurovision Barei has been a music making machine and has churned out a whopping five singles in 2017 including ‘I Don’t Need to Be You’, ‘Worry Worry and ‘Wasn’t Me’- all dance floor fillers. Her first release of 2018 continues in the same vein. ‘You Number One’ begins with a beach vibe and acoustic guitar. It cranks it up a gear at the chorus, getting faster with some clapping and whistling that could make it a real summer hit.

Check back next month when we’ll be giving you a run down of all the hits from Eurovision stars released in May!