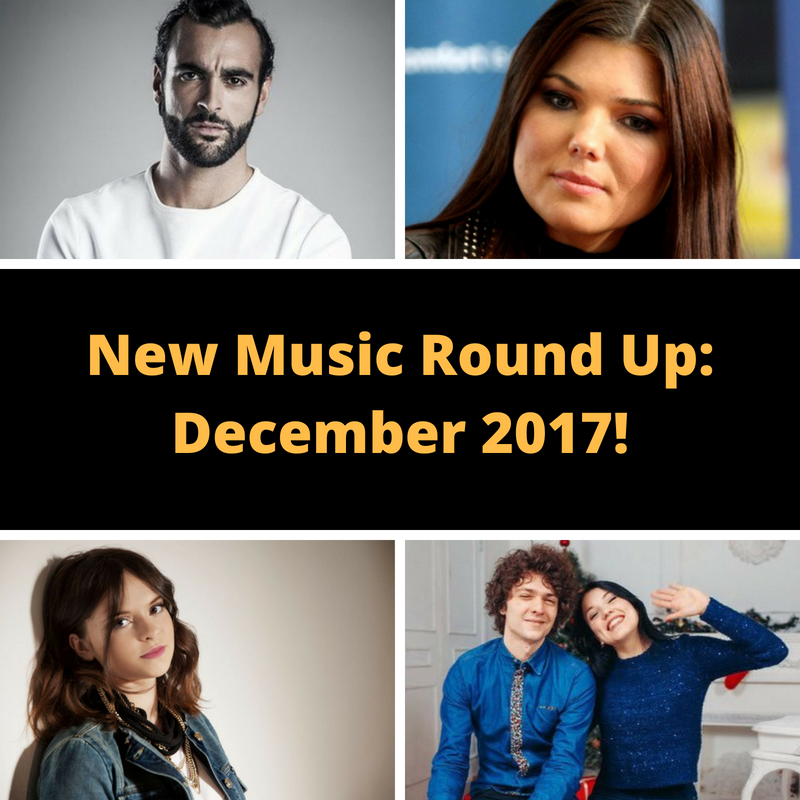 As we get ready to bid a fond farewell on 2017 and look ahead to what musical treats 2018 has in store for us Eurovision fans, we take a look back on the music that was released in December 2017. This included new releases from Italy’s Marco Mengoni, Belarus’ Navi Band and Compact Disco from Hungary. Check out the new songs here:

Navi Band were one of the more memorable groups from Eurovision 2017. Their song ‘Historyja Majho Zyccia’ secured Belarus a place in the grand final and their chemistry, charm, endearing harmonies and their hi yi yi yi ohs saw them finish in a respectable 17th place. The pair recently announced that they are expecting their first child, but maternity leave will have to wait a little bit longer as they embark on the release of their new single ‘A Dzie Zyvies Ty?’ (‘And Where Do You Live?’). The song begins with a pleasant guitar riff, a folky melody and the perfectly harmonised vocals we expect from the duo. It’s not quite as catchy or upbeat as their Eurovision song, but is definitely worth a listen, the perfect chill out soundtrack.

Marco Mengoni gave Italy their third consecutive top ten finish when he came seventh with ‘L’essenziale’ at Eurovision 2013. Since his appearance at Eurovision he has had four number one albums and four number one singles in Italy, as well as several other top ten hits and a string of awards including Best European Act at the MTV Europe Awards in 2015 and has won the Best Italian Act at the awards show on three occasions. He teams up with the artist Giorgia for his latest track ‘Come Neve’ (‘Like Snow’). The song is essentially a slow-tempo love ballad with the two singer serenading each other over piano keys. It has moments of beauty and the vocals are superb by both singers especially when paired together.

Compact Disco impressed at Eurovision 2012, making it to the Grand Final with the song ‘Sound of Our Hearts’. The group finished in 24th place and since Eurovision have had moderate success in their native Hungary including five top ten hits. After almost a four year hiatus, the group return with a new album ‘Compact Disco 4.’. The first single from the new album is the track ‘Veled’ (‘With You’) which is an understated synth pop record that while pleasant never really peaks.

Francesca Michielin’s Eurovision 2016 song ‘No Degree of Separation’ perhaps didn’t reach its full potential in showcasing Francesca as an artist. Nevertheless the singer finished in 16th out of 26 songs and hit the number one spot on the Italian charts. Francesca has gone on to release a string of ballads ‘Un cuore in due’, ‘Vulcano’ and now new single ‘Io Non Abito Al Mare’ (‘I Do Not Live At Sea’). The latest offering is very similar to her previous tracks, setting a sombre mood from the very first chord. The vocal is accomplished, but the song (like her Eurovision song) fails to wow.

Paula Seling is best known for her partnership with Ovi, with whom she twice represented Romania at Eurovision. Their first collaboration ‘Playing With Fire’ in 2010 gave Romania their best ever result at Eurovision to date when it finished in third place. Their follow up duet ‘Miracle’ saw the pair take to the Eurovision stage again in 2014 but they couldn’t improve on their result coming 12th in the Grand Final. Paula has had a number of solo songs but none since her 2014 Eurovision appearance. That is until now. Her new song ‘Departe de Soare’ (‘Far From the Sun’) is a beautiful, almost operatic ballad with a real Christmassy feel. You can just imagine yourself lighting a fire, watching the snow come down as you listen to this in the background.

Expect to hear even more new music in the New Year and coverage from all the selection shows! Until then, have a happy Christmas and a wonderful New Year!