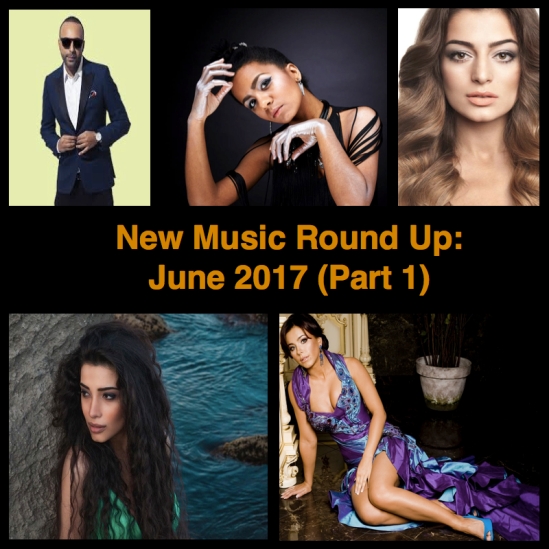 June has been so jam-packed with musical goodness that we have had to split our music round up across two parts. This first part includes new songs from Croatia’s Nina Kraljic, new music from Samra, Aminata, Barei, Ani Lorak and Manel Navarro, as well as three new songs from Armenia’s Iveta Mukuchyan including a duet with fellow Depi Evratesil judge Aram MP3, some rock hits from Cyrpus’ Minus One and Romania’s Voltaj and a new solo song from FreakyFortune’s Nikolas Raptakis. Check out the line up below!

Nina Kraljic came into our consciousness when she represented Croatia at Eurovision 2016. Apart from her bizarre fashion sense, she was remembered for her vocal abilities and her song ‘Lighthouse’ gave her a 23rd place finish in the Grand Final that year. Since then she has been focused on promoting her new album ‘Samo’ and ‘Vir’ becomes the third release from it. The song is a beautifully sculpted ballad with a powerful chorus, while the video sees Nina chair dance in a darkened room while a classically trained dancer pirouettes in a partially lit room and is later chased around a house by someone who looks a bit like Derek Acorah in full make up.

Spanish surfer dude Manel Navarro regaled us with his beach hit ‘Do It For Your Lover’ at Eurovision 2017. Wasting no time, just a month on from his Eurovision appearance and Manel has launched into his career proper with the release of ‘Keep On Falling’. The video sees Manel playing guitar in a rocking chair (think James Blunt in ‘Goodbye My Lover’) while a woman looks at her face in the mirror and realises that Manel has written insults on it while she was sleeping. The song is a soft, slow guitar ballad that while melodic is borderline whiny.

Maraaya are the married Slovenian pop duo who represented their nation at Eurovision 2015. While Marjetka wowed us with her iconic headphones that year, Raay has impressed us further when earlier this month he occupied all five of the top five positions on the Slovenian music charts. The duo team up again with BQL for latest song ‘Sjaj’. ‘Sjaj’ has major summer party beach vibes not only with the song but with the video that sees a couple enjoy performing choreography with an inflatable mattress. It’s complicated!

In 2015 Eurovision Romanian rockers Voltaj impressed with rock ballad ‘Start All Over Again’, finishing in 15th in the Grand Final. They’ve had continued success in recent years releasing songs from latest album ‘X’. They’re back in 2017 with new song ‘Cred ca-s hip’ which samples the clicking of a women’s high heels and sees the band trapped in colourful straitjackets. The song is a fun, even funny, upbeat alternative pop track, that put me in mind of a poppier version of a Gogol Bordello song. Definitely a far cry from their more serious topic they chose to cover for their Eurovision song.

Since her seventh place finish at Eurovision 2016, Iveta Mukuchyan has followed up ‘Lovewave’ with hit after hit. Her solo efforts have included ‘Hars’, and ‘Keep On Lying’ and she has also teamed up with fellow Depi Evratesil mentor and Armenian Eurovision representative Aram MP3 for song ‘Dashterov’. This month Iveta has treated us to a hat trick of hits including ‘Amena’ (an electro dance song), ‘Hayastan Jan’ (which has more of a folk ballad vibe) and another duet with Aram ‘Al eghnim’. The three songs showcase just how diverse Iveta is, singing in so many different styles, while remaining true to her unique artistic identity.

Arash is the Azerbaijani singer who impressed Eurovision audiences along with Aysel at the 2009 competition. The duo’s song ‘Always’ gave Azerbaijan a third place finish. Since Eurovision the duo have gone their separate ways with Arash releasing a number of hits especially in Eastern Europe and Asia, most notably collaborating with internationally renowned rappers Sean Paul on ‘She Makes Me Go’, Snoop Dogg on ‘OMG’ and T-Pain on ‘Sex, Drugs, and Rock and Roll’. Arash returns with new music in 2017 including solo effort ‘Esmet Chichie’ and ‘Se Fue’, a duet with Mohombi (you may remember his song that poorly used the Cranberries’ ‘Zombie’ as a sample?). Both songs are generic, derivative of faux-Bollywood and instantly forgettable with ‘Se Fue’ being the slightly better song of the two.

Fresh from her appearance on Russian singing TV show ‘Golos’ where she was mentored by fellow Eurovision 2015 alum Polina Gagarina, Latvia’s Aminata releases new single ‘Your Arms’. The song sits comfortably with Aminata’s style- an electronic pop ballad. Although the song is much softer than say ‘Love Injected’, ‘Fighter’ or ‘Red Moon’, it is no less effective. Aminata’s vocal ability as always is central to the success of her songs and ‘Your Arms’ is no exception with the chorus being a particular highlight. Aminata also has a bit of fun with the video, check it out!

Spanish singer Rosa Lopez, rose to fame when she gave Spain a seventh place finish at Eurovision 2002 with song ‘Europe’s Living a Celebration’.  Since Eurovision, Rosa has released ten albums and even won the third season of the Spanish version of ‘Dancing With the Stars’. She’s back with more music in 2017 including new album ‘Kairos’, and from that album comes ‘Al Fin Pienso En Mi’, a fun time pop track with jazz elements.

Barely a month goes by when Spanish Eurovision representative Barei doesn’t release s new track. June is no different as the ‘Say Yay!’ singer follows up a recent string of hits with ‘Wasn’t Me’. The track, not to be confused with the Shaggy song, is an auto-tune feast, with piano, drums and a hook of a chorus with ‘Better hush!’ repeated again and again to great effect. However, aside from the chorus, the song is not memorable enough to warrant subsequent listens.

Nikolas Raptakis has flown the coop and gone it alone, leaving behind Theofilos Pouzbouris, his 2014 Eurovision band mate from Freaky Fortune. Their joint effort, ‘Rise Up’ gave Greece a 20th place finish in the Eurovision Final that year. Three years on and Nick gives us ‘Variemai’ a trumpetty, easy listening track with a mix of ska type singing and almost rap. Solid effort.

Samra was going to need a ‘Miracle’ to live up to Azerbaijan’s very impressive Eurovision track record when she represented the nation at Eurovision 2016. The song did well, seeing her through to the Grand Final, but 17th place was one of Azerbaijan’s worst results to date, with only Dilara finishing in a lower position than her in their ten year history. Nevertheless, Samra releases her first song since her Eurovision appearance. ‘Badminton’ is an enjoyable, funky song that allows Samra to strut her stuff in sexy sports gear and a pink poodle. Her video is an effort to set her up as the Azeri Ariana Grande and it almost works.

Ani Lorak- ‘Do You Still Love Me?’

Ani Lorak is one shady lady. Or so her 2008 Eurovision song would have you believe. The song placed in second that year behind Russia’s Dima Bilan, but finishing runner up has not stopped the progression of Ani’s career. The Ukrainian pop goddess has had a number of chart topping albums including ’15’, ‘Sun’ and ‘Light Heart’. This month she releases new song ‘Do You Still Love Me?’ complete with grippingly evocative video which sees Ani being repeatedly thrown from a chair my a queue of men, who then drag her across the floor, while she clutches a bleeding red rose. This is an equally dramatic song with a mix of strings, keys and a drumbeat that compliments her voice perfectly.

Minus One- ‘Other Side of Mind’

Minus One rocked the Eurovision stage in 2016 with anthem ‘Alter Ego’ and have released a number of follow up songs in 2016 including ‘Save Me’, ‘Invincible’ and the bizarrely name ‘The Potato Song’. A year later and they offer us ‘The Other Side of Mind’, a mix of country/folk music and Francois Micheletto’s raspy vocals which mimic a vocal style synonymous with 90s/00s heavy metal bands (think Slipknot’s Corey Taylor or Chris Cornell from Audioslave with elements of Manic Street Preachers). The song’s video offers us another side that we don’t usually see in pop culture- older people being active and having a good time!

Click here for Part Two of our June New Music Round Up and be sure to let us know which of the songs you love and which you hate!