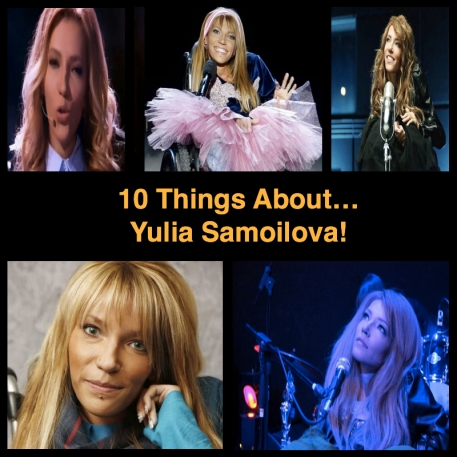 Yulia Samoilova was chosen by Russia to represent them at the 2017 Eurovision Song Contest. We get to know the singer a bit better in our feature 10 Things About…Yulia Samoilova!

2. As a child, Samoylova began losing function of her legs due to spinal muscular atrophy and has used a wheelchair since childhood.

3. The singer says that exacerbation of the hereditary disease could follow after an unsuccessful poliomyelitis vaccination (Channel One and TASS also take this view), but specialists deny such a connection.

4. Samoylova started her career performing for oil workers at a restaurant in her hometown Ukhta.

5. In 2010 she graduated from Modern Humanitarian Academy with a major in psychology.

6. In 2013, Samoylova was the runner-up of season three of the Russian version of The X Factor. She performed a number of hit songs on the show including the Serbian Eurovision winning song ‘Molitva’, but ultimately lost out to eventual winner Mali.

7. In 2014 Yulia took part in the opening ceremony of the Winter Paralympics where she sang the song ‘Together’.

8. Yulia was chosen by an internal selection process to represent Russia at Eurovision 2017 with the song ‘Flame is Burning’.

9. Shortly after her appointment as Russia Eurovision representative, the Security Service of Ukraine announced that she may be banned from entering Ukraine to compete at Eurovision, due to her visiting Crimea in 2015.  This is due to Ukrainian law forbidding the entering of Crimea via Russia. Yulia has denied that she performed in Crimea in 2015.

‘This song is about me, about what I say in every interview. You must always go to your dream, you need to burn, have a good heart inside, and then you will light the way to yourself and your loved ones.’