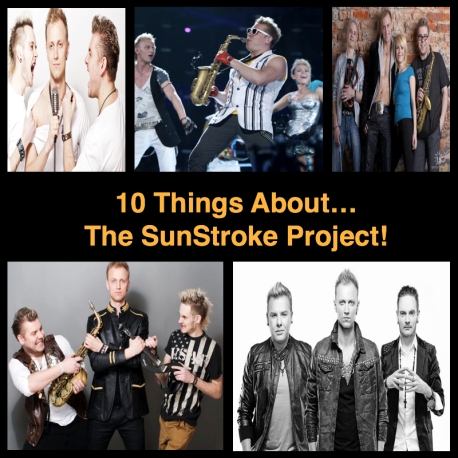 2. The name of the group was chosen by Anton Ragoza whilst working in the army with Sergey Stepanov, where out on the field he got sunstroke.

3. Sergey’s musical tastes and influences range from modern DJs like David Guetta, David Vendetta and Tiesto to Jazz, House, Pop and R&B music. In particular he has been influenced by Russian saxophonist Igor Butman.

4. Anton Ragoza is the violinist and primary musical composer for the band. He has conducted the orchestra of Chişinău and won a series of prestigious awards in the field of classical music. Anton has identified Justin Timberlake and Michael Jackson as his musical inspirations.

5. As of 2009, Sergei Yalovitsky is the vocalist of the band. He previously worked as a singer on cruise lines and has won various awards for singing in both Moldova and Romania.

6. In November 2010 the producer, Aleksei Myslicky and some other members left SunStroke Project and created a new band in Moscow called Offbeat Orchestra who have performed and released versions of some of the songs by SunStroke Project.

7. The band has a long history with Eurovision. They represented Moldova back in 2010 along with Olia Tira with song ‘Run Away’. The song reached the final of the Contest and finished in 22nd place. Prior to this the band had teamed up with Olia Tira in 2009 for song ‘No Crime’ but missed out on being selected finishing in third. They returned to the Moldovan national selection show again in 2012 with ‘Superman’ which didn’t make the national final, two songs in 2015 of which ‘Day After Day’ came third and of course in 2017 where they were successful in being selected for the second time for song ‘Hey Mamma!’.

8. Sergey Stepanov, the group’s saxophonist garnered widespread attention following their appearance at Eurovision 2010. Despite having no social media presence himself, he became famous across the internet in a meme known as ‘Epic Sax Guy’ or ‘Saxroll’. The remixes of his saxophone solo have millions of hits on YouTube.

9. The band have also had success outside of the realms of Eurovision with a career spanning over ten years. Despite a number of successful singles and cover songs and collaborations, the band have only released one album which has limited copies and little is known about even the track listing for it. The album was called ‘Don’t word more…’ Their singles have included the songs ‘Epic Sax’, ‘Scream’, ‘No Crime’, ‘Summer’, ‘In Your Eyes’, ‘Set My Soul On’ and ‘Sunshine Day’.

10. For a brief period in 2008/2009, Moldovan singer (and Eurovision representative in 2012) Pasha Parfeny joined the band. Pasha wrote and composed their song ‘No Crime’. He left SunStroke Project to pursue a solo career after his contract expired.

Listen to the plethora of hits from the SunStroke Project with our YouTube playlist: