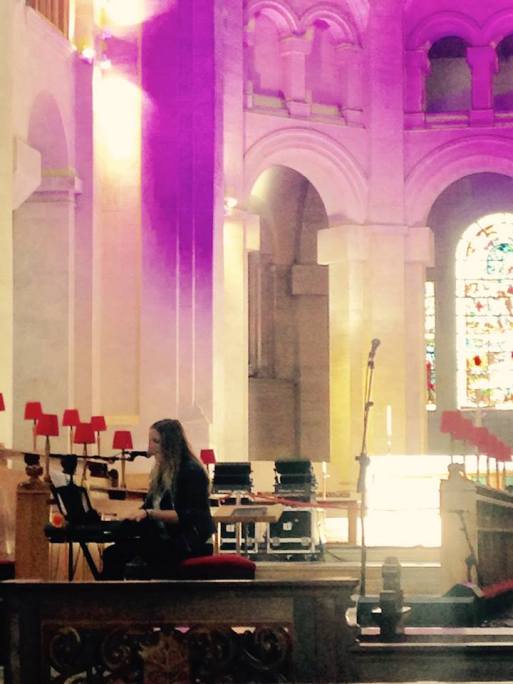 Irish Eurovision 2015 singer Molly Sterling treated her Belfast audience to new music on Friday afternoon in a gig which formed part of the city’s 2016 Culture Night programme. The ‘Playing With Numbers’ singer took to the stage (or should that be altar) in St. Anne’s Cathedral to trial some of the new songs she had recently penned.

The gig kicked off with a subdued performance of a song about forbidden love with Molly’s powerful vocals amplified by the brilliant acoustics of the cathedral’s dome. When Molly introduced her third song of the set it transpired that it was her first time performing some of these songs live. This included ‘Did He Teach You How To Cry?’, an emotional song with hints of anger, pain and rage followed by a song that was written just three days ago entitled ‘Stranger I Knew’. “I just wrote this song three days ago, so it could be a bit sketchy’, the singer joked. According to Molly, the song about a space cadet that she met a few days previously and who made such an impact that she felt compelled to write a song about him.

Later in the set, Molly debuted another song ‘I Am But A Man’, a song which Molly wrote commenting that “…the simplified version is that I was mad at everything and just wanted everyone to be nicer to each other”. The song is dark and very poignant with the lyrics ‘This is no exhibit and I am but a man’ echoing around the cathedral’s dome with the audience so quiet you could hear a pin drop.

By the time Molly hit song seven ‘Deserve Such a Crime’, she quipped that “Sorry for the sombre mood of the songs but that’s why I wore my unicorn t-shirt as a contrast”. The song opens with the line ‘I was always smaller than you’ with an effective refrain of ‘I would have given an arm and a leg to have you stay’.
Unfortunately Molly didn’t regale the crowd with her Eurovision song ‘Playing With Numbers’, but she herself was playing with numbers, the new numbers that she had written and debuted for the Belfast audience. Molly finished the set with a cover of a song by one of her favourite bands Kings of Leon ‘Cold Desert’. She assured the people in the pews that while it is a Kings of Leon song, I promise it’s a quiet one.

All in all the set was well-accomplished with some great new songs from Molly. It’s hard to believe that with such well-written bank of songs in her repertoire that Molly is only really starting out and is the tender age of eighteen. We look forward to her full length debut album.