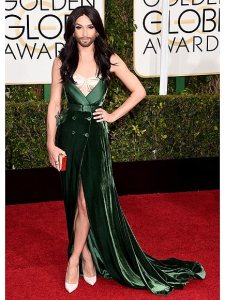 You have been voting for your favourite Eurovision songs all week and it is finally time to reveal the results of who will battle it out in next week’s final five.

First things first and the two songs that received the fewest votes this week and who are therefore eliminated from next week’s final are Margaret Berger from Norway with her song from the 2013 contest “Feed You My Love” and the second song getting eliminated was the 2005 winner from Greece Elena Paparizou and her song “My Number One”. Berger finished in seventh (with 0.25% of the vote) and Paparizou in sixth place (with 0.45%).

For the third week in a row Conchita topped the poll with her winning song from last year “Rise Like a Phoenix”. This week saw her win with an overwhelming majority, 88.8% of the vote. In second place was Abba’s “Waterloo” with 5% while Loreen’s “Euphoria”, Alexander Rybak’s “Fairytale  and the Common Linnets’ “Calme After the Storm” round up the top 5.

Voting for for the final week is now open where you will only be able to vote for one act. We will close the poll at 8pm on Friday 10th April and will announce the overall winner. Be sure to vote for your favourite and see the full results below.