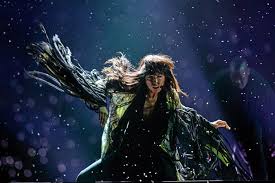 The results are in and we have the other five acts who will progress to the final stages of our poll competition to find out ultimately which song is your favourite Eurovision song ever.

Joining them from Semi Final 2 will be Loreen with Euphoria which topped the poll with 43% of the vote, the Netherlands’ Common Linnets with Calm After the Storm (21%), Eric Saade with ‘Popular’ (11%), Verka Serduchka with ‘Dancing Lasha Tumbai’ (7%) and Margaret Berger from Norway with ‘Feed You My Love’ (also with 7%).

Eliminated from the competition after Semi Final 2 vote were Charlotte Nielssen, Lordi and Lena

The top ten will be decided over the course of the next eight weeks with the song with the lowest number of votes getting eliminated every Friday and we will crown our overall winner, just a week before the Eurovision Final.