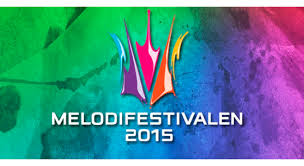 The second heat of Melodifestivalen took place tonight 14th February in Malmo and was presented again by Sanna Nielssen and Robin Paulsson. Proceedings kicked off with a slapstick song and dance number by the two presenters called ‘Vad Kan Ga Fel?’ or ‘What Could Go Wrong?’. The very funny performance saw Sanna Nielssen reveal her underwear with a coat hanger emerging from her crotch while Robin Paulsson’s stunt double did handstands across the stage and fell over.

The show kicked off proper with the first contender Linus Svenning’s ‘Forever Starts Today’. The tough guy with shaved head, tattoos and piercings didn’t live up to his image as he sang with quite an understated voice. He was accompanied by fire drummers and the song was quite a catchy number.

Up next was a very slow, lack lustre ballad from Emelie Irewald who sang in Swedish ‘There and Then With You’. Emelie was quickly followed by up tempo ‘Groupie’ from Samir and Viktor whose energy was infectious. The duo were soon joined on stage by backing dancers and as they sang about taking a group picture, they actually produced a selfie-stick and took a ‘Groupie’ which was later shown on the TVs on the stage that they danced on. Amazing staging effort. 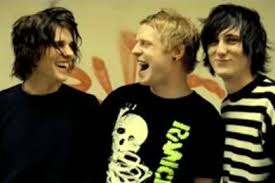 The fourth song saw perhaps the worst boy band I’ve seen in recent years. Think McBusted if they underwent a personality bypass. Yes it was Neverstore and their song that hypothesized what they would do if they were ‘God For A Day’. This was then followed by two older women Marie Bergman and Sanne Salomonsen who did their best Stevie Nicks impression with their song ‘Nonetheless’ but only ended up sounding like cats being strangled and nails being scratched down a chalkboard.

Our last two songs were more upbeat with Magnus Carlsson treating us to a poppy air steward/cruise ship number ‘Meet Me in Old Town’ and Mariette (Loreen with a dreadlock birds nest on her head) sang ‘Don’t Stop Believing’ which was also very well performed.

In the end the first two acts to be eliminated were Emelie Irewald and Marie Bergman and Sanne Salomonsen.

Mariette first chosen to go directly to the Melodifestivalen Final

Mariette and Alcazar’s Magnus Carlsson have qualified out right for the final of Melodifestivalen, and will join Eric Saade and Jessica Andersson who both qualified last week.

Linus Svenning and Samir and Viktor did not qualify outright but will join Dolly Style and Behrang Miri and Victor Crone in the Second Chance round which will take place the week before the final and will give the acts an extra chance to qualify for the grand final.

Melodifestivalen continues next Saturday 21st February with the third heat which will see another two acts qualify directly for the final and two acts move into the Second Chance Round.