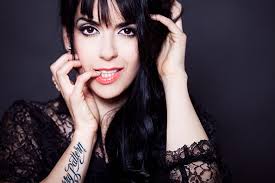 Spain chose ex-UK X-Factor contestant Ruth Lorenzo and her power ballad ‘Dancing in the Rain’ as their entry for Eurovision 2014 but which acts narrowly missed out to her and do you agree with the choice that Spain made? The Spanish selection process is comprised of a 50% public vote and a 50% jury vote and the results were tight indeed.

Brequette and Lorenzo were tied on points when they had all been tallied with them both on 66. In the end Lorenzo was chosen because she had received the most votes from the public. Brequette’s song is similar to Lorenzo’s in that they are both powerful ballads with lead female vocals and are sung in a combination of Spanish and English. While Lorenzo’s song is more of a pop-rock ballad, Brequette’s song is more pop-R n B something similar to Jordin Sparks. Have a listen to the song here:

Ah Jorge. What a wee hottie! It would have been nice to see him at the Eurovision finals this year to up the much needed eye candy factor. The song is quite good too. A poppy song with decent vocals from Jorge. Swoooooooon! Check out the video for Aunque Se Acabe el Mundo’ below:

Spain seem to love their powerful love songs. Every entry in their national final seems to fall into that genre and Raul’s ‘Seguir Sin Ti’ is no exception. This song is a bit slower than the other and fails to make much of an impression. Check out his performance below: