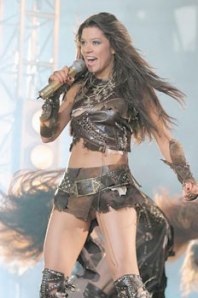 As national selection processes go, Ukraine is one of the more intense ones. Twenty acts competed for both the votes of the Ukrainian public and a panel of expert jury members. In the end it was Mariya Yaremchuk who was selected despite some acts protesting that the phone line for their songs had closed long before Mariya’s had, therefore giving her a more increased chance of winning. The winning song is called ‘Tick Tock’ but let’s have a look at the other entries that could have been Ukraine’s representative this year:

Ukraine love their female pop beauties at Eurovision. In the past few years we’ve had Zlata Ognevich, before that it was Gaitana, Verka Serduchka and of course who could forget Ruslana winning the competition in 2004 with the anthemic ‘Wild Dances’. This year is no different with the gorgeous Mariya being their choice and this song ‘Love is Lord’ by Viktoria Petryk coming a close second. The song itself is heavily influenced by Loreen and her smash hit ‘Euphoria’ but Viktoria’s vocals fail to match up and at times borders on annoying especially the ‘wake up wake up wake up’ part and the dubstep towards the end. It surprises me that this song finished so high up the pecking order given that it’s all over the place and quite messy. Have a listen and let us know what you think:

We’re sticking with the beautiful ladies now with our second contender for the Ukraine’s Eurovision could have beens. Natalyia Valevska’s ‘Love Makes You Beautiful’ sounds like a One Direction sequel to the huge hit of a similar name but unfortunately the song is a train wreck from start to finish. The lyrics are so incoherent and the vocals sound like a cat being strangled underwater (or at least that’s what I imagine it to sound like, I haven’t actually witnessed such a violent act). Have a listen for yourself and make your own mind up:

The final contender is not to be confused with the oscar nominated Polish director Roman Polanski. No this is Roman Polonsky. I can see how it would be confusing though. His song ‘Wanted Dead or Alive’ is a much welcomed improvement on the other two entries above but actually finished well behind both the ladies in the voting. He kinda looks like Pitbull and would seem to draw his influences from Bon Jovi, not just in how the song sounds, but even the very name. Have a wee listen here:

Did Ukraine pick the right song based on these alternatives? Let us know what you think.