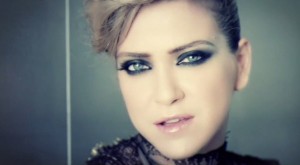 You wouldn’t want to mess with Mei!

Mei Finegold is one bitch that you wouldn’t want to mess with. She’s fierce, feisty and when she sings the lyric she ‘skinning you up’ boy do you believe that she will if you’re stupid enough to cross her. Her video is aptly located in a boxing ring and you can be assured that she really packs a punch.

The same can be said of her song ‘Same Heart’ which is the Israeli entry in this year’s contest. The song is delivered in both English and Hebrew which serves as a good mix. It has elements of rock, pop and electronic dance and could see Israel qualify to compete in the final for the first time in four years.

As well as filming the video in a boxing ring, we are also treated to Ms. Finegold playing with a samurai sword Kill Bill stylee as she shouts the refrain ‘We don’t beat from the same heart’. Bunny boiler alert! Other influences in the video include Beyonce ‘Single Ladies’ backing dancers all dressed in black. The only difference is their psycho eyes. Check out her video below: