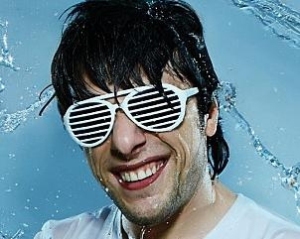 Okay…so a bit about Aram MP3. He has a background in comedy taking part in ’32 Teeth’ Comedy tour which saw him join other comedians and perform humorous covers of many popular songs. He is also known for presenting Armenia’s versions of hit talent shows Pop Idol, X Factor and Power of 10. Since then he began performing in Blues and Jazz bars and recording his own music and competed in the Armenian national selection process winning him his spot at Eurovision this year.

It upsets me greatly that this song is by far the bookies’ favourite to take the Eurovision crown this year. Why? Well first of all his name. How daft is that? MP3? Is music in a digital format only now reaching eastern Europe? Why MP3? Why not MP4? or WAV? or FLAC? or WMA? Stupid name!

Secondly the song isn’t anything special. It begins as any run of the mill Eurovision ballad, and not even a good one at that with piano, violins. Then a drum beat kicks in at the chorus and by the end our ears are treated to…wait for it…some dubstep! YAWN! When I think of Eurovision, the first thing that comes out of my mouth is not dubstep. Nor is it the second, third, fourth or even seventeenth! Wise up!

Eurovision is not the place for dubstep!

Thirdly I’m not a fan of the ballad at the best of times but this isn’t even the best ballad in the competition this year. The song lacks substance and just repeats the same three words over and over again: ‘You’re not alone.’ and what? Nobody cares Aram MP3 (uck that name again!)

Then there’s the video. It’s lazy. It’s all smoke and lights both literally and metaphorically.

And finally there are the allegations that he is homophobic. When asked about fellow competitor Conchita Wurst who performs in drag, he is quoted as having said “hopefully, we will help her to eventually decide whether she is a woman or man”. He has also gone on to say that “I do not live such life, and regardless how the world progressed or regressed, this is an unacceptable subject matter for me.” Is he not aware of the large LGBT community following that Eurovision has and how many people he could turn against him with such comments?

Anyway check out the video for ‘Not Alone’ below and let us know what you think. Should it win? (No it shouldn’t. Please don’t vote for it).